Passenger on flight from Baltimore to San Diego had infectious measles, officials warn

With all the recent flying, I'm glad my one-year-old is fully up to date with his vaccines. As the San Diego County health officer said, "Measles is so contagious that if one person has it, 90% of the people close to that person who are not immune will also become infected."

By the way, I had an interesting discussion with an autism expert recently and he concluded that with more and more evidence that signs of autism are detectable well before the age of one (and the likely development of techniques to detect autism in infants in the near future), the anti-vacciners will have to come up with another excuse for putting their kids at risk of getting terrible communicable diseases. 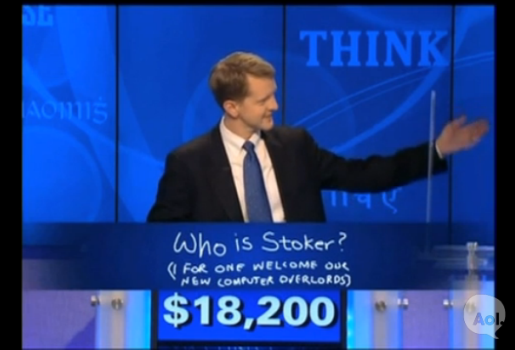 Oh, no. NPR, you did it again. I've said before that journalists make terrible science reporters, but this is just bad. A computer beat two Jeopardy champions pretty easily. It was an interesting game to watch and an amazing feat of technology, but Martin Ford, a computer programmer and writer decided that winning at a game show is enough evidence to show that computers can take over medicine, emphasizing on radiology. He said, "Radiologists basically focus on looking at visual images from medical devices — things like X-rays or CAT scans, that type of thing. Now, machines are getting much better at analyzing that type of visual information."

Arrgh! Radiology is not just looking at images. It isn't even just pattern recognition. It's putting together information from a vast number of sources (patient history, previous scans, pathology, physical properties of the imaging technique, variances in image acquisition, positioning of patient, etc.) To be an effective radiologist, you can't just look at every image with the same formula (if you can, who needs a radiologist?). That's a start, but personal experience at interpreting images and intuition about what the image and patient history points to adds a lot. It's that intuition that looks more closely at an image or orders a different view that makes the diagnosis.

I don't doubt that computers will eventually able to do this, but just because one won at Jeopardy, doesn't mean that it can start replacing radiologists. In reality, if computers get good enough to accurately interpret all types of images (at least with the same accuracy of radiologists), then they'll be good enough to take an effective history, perform a physical exam, order and interpret appropriate lab tests, perform procedures or even surgery and prescribe medications. The only medical specialty that would be safe is psychiatry (that is, until it starts using real science also). I don't see that happening in my lifetime, and if it does, we'll be living in a pretty different world.
Posted by MXH at 9:56 PM 0 comments

Looking back at the match process

It is not necessary to read this book.
OK, so we're finally getting towards the end of this crazy "match" process to get into a residency program. I think I've got my rank list down and I'll find out where I end up in March. Now that I've got about a month to wait, I could reflect back on the process. Here are some general thoughts:


1. Interviews
Interviews were a lot of fun and, at least in radiology, almost completely stress free. Those interview preparation questions that the school provided us with were pretty much useless. The conversation-like interviews I had with faculty really helped me get to know a program and helped me let them know the kind of person I am. The few "standard" interviews I had were very awkward for both parties and probably not very helpful for either (especially, the one where one faculty member was interviewing two applicants at once). Some quick points: At first I started reading about the faculty at the institution, but I gave up on it pretty quickly. I never had to bring it up and the casual conversations we were having were much better. Buying and carrying a leather portfolio was useless. I never had to pull out a CV or research paper. I lost it half-way through the interview process and never bothered getting another one. There will be "illegal" questions (especially, "where else are you applying?"). I also once got asked what religion I was ("none" was the response, in case you were wondering).

2. Traveling
Holy crap this is expensive. I went to 10 radiology interviews and 9 intern year interviews. Some I drove to, some I flew to. A few places provided a hotel room, most didn't. I kept track of the total cost and I just hit $3000. Add to that the application fees and it gets close to $4000. That's why most people take a loan. A couple of tips: Southwest is awesome (cheap, free bags, can cancel/change without a penalty; it doesn't get better). Renting a car is often cheaper than taking cabs everywhere and it gives you a chance to explore the town. Signing up for frequent flyer and hotel loyalty programs pays off, even if you end up not using the points. I got nice hotel upgrades and free perks (drinks, snacks, higher floor) just because I attached a number to my name. Trying to cluster all the interviews in one region together is nice, but will probably end up to be impossible. TSA sucks, though, I found out that if you freeze your liquids, you can take more than 3 ounces.

3. Research experience
With 10 years of research under my belt, I thought I'd get most questions about my work. Unfortunately, most radiology programs don't care about it (some even see it as a liability in residents). They just want you to check off that box. For example, a top-tier program that has amazing research claimed that all their residents complete a research project during their stay. When I asked how much research time they get, the answer was "7 days a year" (really? It takes me 7 days just to pick a background for my computer station). Something like 75 to 80% of radiology residents go into private practice, so it doesn't matter to them. However, it really hurts the field. With procedures and image interpretation being constantly taken away from radiologists by other fields (cardiologists read echos, vascular surgeons do interventional procedures, ER physicians perform and interpret their own ultrasounds), the future of radiology as a field depends on innovation. When research is shunned by training programs, the innovation will be taken by other departments also.

4. Intern year
So useless. From every radiologist I've heard that it has had no impact on their ability to be an effective radiologist. I applied to lots of intern year programs (some easy, some tough) so that I could live in the same city for both intern year and the radiology years, but it's unlikely that I'll be able to pull it off. That's OK, though. A brilliant comment I heard from a resident was "It's better to lose a weekend moving than to lose every weekend because you chose a tough intern year so that you could stay in the same city." I got some great intern year interviews, but if I could do it again, I wouldn't take location into consideration.

5. Rank lists
People really talk as if there's a strategy to it. There is none, just put the programs in order of your preference. It makes no difference if your number one is a long shot.

6. It's a big game.
By that, I mean that there are specific things that you should do to get an interview or to be considered for a position. These things have no relation to your strength as an applicant, but if you don't do it, your chances at matching may be hurt. For example, there are letters of interest, sending thank-you notes, sending "love letters". Towards the end of November or early December comes a point when you start getting worried about the number of interviews you've gotten and you haven't heard from some of your favorite places. At this point, sending a letter of interest can get you an interview. It really makes no sense (I mean, you applied there, so you're interested, right?), but it makes a big difference to some people. I've heard of a program where they won't interview anyone who doesn't send a letter of interest. I suppose it's to separate people who really want to go to the program from those that are applying to every program in the country (it happens), but if there's an unspoken rule that you must send a letter of interest (after actually applying) to be considered by a program, you might as well make it part of the application process. "Love letters" can go either way. Applicants can tell a program that they will be ranking that program first and programs can tell applicants they are raking them high. What either party says, however, from what I've heard, means absolutely nothing. Programs want to tell lots of applicants that they're ranking them high to get applicants to rank them high, so they can brag about getting their first choices. ... I could go on and on about this, but suffice it to say that the whole process leaves me with a bad taste in my mouth.

7. Med school
It falls to the background. There is no way I'd be able to go to all these interviews and still be on a clerkship. I'm glad I set up my schedule to maximize my time off during 4th year. Speaking of 4th year, the great thing about it is that pretty much everything is self-run. Your grade doesn't matter anymore, so it's all for fun and interest. The bad thing is that, unless you want to have a horrific 3rd year-like schedule, it consists of an awful lot of shadowing. It makes you burn out pretty quickly. Oh well, only a few more months.
Posted by MXH at 6:48 PM 0 comments