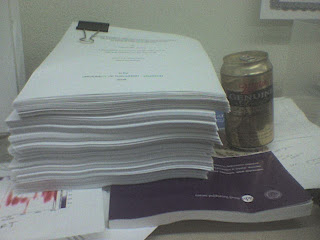 Five copies of the dissertation > 1 beer

I just turned in my dissertation to my committee. Six months worth of writing and 340 pages certainly took its toll. Strangely, I still feel like I haven't completed my research. Oh well... now I have two weeks to sit on my ass and make a semi-decent presentation.

One thing I've realized in the last few days is that after 4+ years of research, I'm finally comfortable where I am. I know how things work in my lab. I like the research, and I've got about a million other experiments that I could do. I feel bad that I'm leaving this comfortable nest and moving to the strange, new world of med school. Oh well, if I've learned anything in life, it is that as soon as you get comfortable with something, you move on to something new and scary.
Posted by MXH at 9:56 PM 10 comments

To tell you the truth, I haven't been following the swine flu epidemic (pandemic?) too closely (too busy trying to finish up that dissertation), so I'm not going to comment on it much (see here and here for the important, life-saving info). One thing that this highlights, though, is how easy it is for the media to scare the public. I'm not saying that it's not warranted now, but the media's tendency for wild speculation will probably end up making things worse, rather than better.

Update: My drug dealing wife (pharmacy student) says that lots of health professionals were calling in today asking for prescriptions of oseltamavir for their family members... lame.
Posted by MXH at 7:41 PM 5 comments

I love Consumers Union and their magazine Consumer Reports. They are a great, not-for-profit, unbiased organization fighting for consumer protection and they independently test the quality of various merchandise. But, they have a terrible habit of using surveys to rate things that cannot be directly tested in their labs. So, the results come up completely misleading. In this month's issue they made the claim that the best treatment for back pain was going to a chiropractor (59% were happy), followed by going to a physical therapist, in third place was acupuncture and way down in the bottom was going to a physician (a mere 34% happy). They sent surveys to a lot of people, but with a vague topic like back pain, basing your ratings by only asking "How satisfied were you with your treatment?" can only result in a meaningless outcome. They have no controls about severity of pain, underlying disease, number of visits or compliance with the prescribed treatment. Also, maybe people who have already made the decision to go to an acupuncturist or chiropractor are more likely to report having a satisfactory experience no matter what the outcome. Maybe people who see anyone once a week for a year will feel better than someone who, at most, sees someone a few times a year for their pain. The efficacy of pain treatment is extraordinarily difficult to measure. A simple survey is far from adequate. Consumers Union should know better (after all, they've got a team of statisticians). They are a very influential organization and this report is giving undeserving ammo to quacks (who are already pimping it) and terribly misleading their readers. Stick with crashing cars and breaking washing machines!
Posted by MXH at 9:56 PM 0 comments

Over at Science-Based Medicine (great site), there is a post by a medical student about his/her concern with a mandatory assignment to a clinic that promotes alternative medicine (things like acupuncture to "control post-partum bleeding" and cupping). This is an unfortunate situation that is creeping into many medical schools (including mine). Dr. Gorski has a great response to the student (document everything, find other students/faculty members who feel the same, then make a formal complaint to the dean). One thing, though, that caught my eye was the following:

Unfortunately, Student X informs me that the dean censors anything said by medical students on blogs or online forums that might bring the medical school into disrepute. Were I to name his medical school and it ever became known who had complained to me, the consequences are likely to be unpleasant.

Is this legal? From the terrible experiences several med students I know have had, my plan, after returning to med school, is to document my experiences (good and bad) here, on this blog. If there's anything that the medical school does that may give it a bad reputation, they should fix it, rather than threaten their students and attempt to hide it from the public. I don't know what the official stance of my medical school is (and I don't plan on asking either), but I don't intend on holding much back.
Posted by MXH at 11:02 PM 5 comments

As fun as gamma band is, I decided it's a bad name for the blog. My research is coming to an end in a few months (it focused more on the alpha band, anyway) and I have no idea whether I'll be working on the same type of research when I come out of the other end of med school/residency in 6 to 8 years. So, I've renamed the blog, "Irrelevant Process." It still relates to my research (actually, it relates more to my research than gamma band) and it is general enough to accommodate the wildly varying topics of my posts.
Posted by MXH at 12:21 AM 2 comments