Two places I could cross out now

I am thinking about the long list of places I will apply to for residency in a few short months. The list is growing by the week, but two just got crossed out: The University of Arizona and St. Joseph's Hospital in Phoenix. I figured I don't want to spend 5 years living in a place where I'll be asked to "show my papers."

Labels: ma'am you are a racist, politics, the match

Out of the psych ward

Just got done with psychiatry. I had a great time. I was in a general adult ward where most patients were voluntary. The staff was great and the patients were very interesting. What was really cool was that in their short stay of 3 to 5 days, most patients actually got better... not something I thought would happen quickly. What was even cooler was that there were no residents, so I was actually a useful part of the team and my patients were my patients. I got to interview them first, I got to write their admission notes, I got to do their discharges. This is probably the closest I've felt to a doctor.

Just for fun, here's something amusing that happened during the rotation:

Attending (while talking to a crack addict that didn't want to stop): You need to stop smoking rock and get addicted to something else. Like this (shows a picture of his cat). You can start getting high off of this.
...
Me (later): Dr. X do you watch South Park?
Attending: Yes
Me: Do you remember the episode where they get high off of cat urine?
Attending: It's called cheesing.
...
Attending (later, to patient): You should probably ignore what I said earlier about getting high off your cat. It's called cheesing and it's bad.

I thought that the only oath I'd be taking in med school is the Hippocratic oath. But, in more than one rotation, I've had to sign papers that certified that I really did read the reading I was assigned or watched the video I was assigned. It's frustrating on two levels. One is that I find oaths in general kind of useless. If someone is going to do something wrong or illegal, they're not going to have much of a problem lying about it. What's more upsetting though is the paternalistic approach that medical schools have towards their students. If there is a reading or video that is recommended, it should be up to me to decide whether I think it's useful to my education. If I don't find it useful, actually doing the assignment will only waste my time. I believe that we're mature enough to decide what the best way for us to study is. I've had hundreds of exams and know pretty well what works for me. The school shouldn't care (and shouldn't make me sign oaths) that I didn't do a particular assignment.

Of course, the administrators don't really remember being students, so they've implemented things like quizzes that ask questions about topics that were in the readings, but not exactly important to clinical practice or (rumor has it) actually make sure that you've clicked on and watched the entire 26 minutes and 13 seconds of the video that is posted on line. This is what happens when you lose sight of priorities... so, if you'll excuse me, I've got to play another video at 2X speed with the sound muted in the background.
Posted by MXH at 9:05 PM 3 comments

I was watching the travel channel and saw this beauty:

A bacon cheeseburger with a Krispy Kreme donut as buns. Looks like I have a good reason to apply for residency in St. Louis.
Posted by MXH at 9:21 PM 0 comments

Someone who shouldn't be a doctor 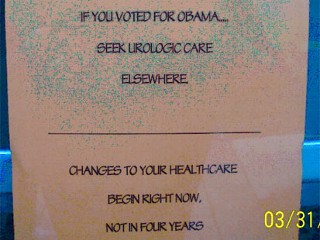 Florida doctor opposed to health care law turns away Obama voters
This sickens me. I would hope that other doctors in the area realize that he's an asshole who won't treat his patients equally and refer their patients with urological problems elsewhere.

(part of me thinks, I'm glad that he's advertising his idiocy and losing patients)
Posted by MXH at 3:58 PM 0 comments