We don't care if it's against your conscience

Looks like the White House will be reversing Bush's federal conscience clause rule. This move makes me more optimistic about the direction Obama is taking us. I often fear that he gives into the other side too much (especially, the religious side) and with his support of faith-based initiatives, I didn't think he'd do much about the conscience clause. This is great, but a lot of states (.pdf)* have their own conscience clause rules.

BTW, the caption of the picture on the article I linked from the Washington Post, has some reverend talking about how this "raises skepticism about the White House's talk of common ground." It seems to be the right wing's MO now... 1) Whatever Obama does, be against it. 2) Complain that whatever Obama is doing is anti-bipartisan.

*Wow, according to this, West Virginia has the least restrictive conscience rule (almost heaven?). Healthcare providers can't even legally refuse to participate in abortions.
Posted by MXH at 9:35 AM 3 comments

I wonder if it helps their depression?

Apparently crocodiles can find their way back to their territories even if they've been moved miles away using the Earth's magnetic field. So, to keep them from returning to their former, human-inhabited territories, Florida officials take them deep into the swamp and attach magnets to their heads, making them lose their sense of direction. Cool, maybe next time I go to Florida, I'll bring a TMS machine with me (or at least a magnetic therapy bracelet). 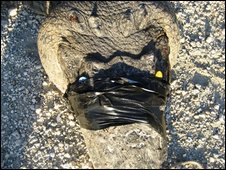 According to Nate Silver alcohol sales (mostly beer) are down almost 10% in the last quarter. That's the most by far in the last 50 years (the previous low was 3.7% down in 1991). Not sure why people aren't buying beer anymore, but if there's any sign that we're entering a deep depression, that's gotta be it. How do you deal with a depression without beer?
Posted by MXH at 9:01 PM 2 comments

Here's a recent "opportunity" from our medical school:

I am pleased to announce that we are again able to offer a rotation in traditional Chinese Medicine (TCM) during the Spring of 2010. This month-long rotation is possible through the exchange program between the Department of Family Medicine and FuXing Hospital in Beijing. In addition to didactic instruction in the principles and techniques of TCM (acupuncture, massage, herbal treatment), students will observe how TCM is practiced in Chinese community health centers and hospitals. Limited hands-on training in acupuncture and/or massage may also be provided.

Now that (yet another) scientific review says that acupuncture is nothing but a glorified placebo effect (and I won't even bother with the rest), aren't there more important (more proven) medical techniques that medical students should be educated in? Does the medical school really think that spending an entire month (of the mere 18 months of clinical rotations that makes up an MD) on traditional (i.e. fake) medicine will really add to their students' educations? Come on medical educators... you can't teach your students about evidence-based medicine and then allow this to count as a month's worth of credit at the same time.
Posted by MXH at 7:03 PM 5 comments